In part one of our ‘intelligent site’ feature, we took a look at some of the digital construction techniques and methodologies that are revolutionising project delivery. Here in part two we present a case study of a live project where Kier is bringing together several strands of technology for the MoJ at a site in Northamptonshire.

HMP Five Wells at Wellingborough is a £253m new-build scheme that is due to complete later this year. James Franklin is head of BIM at Kier Strategic Projects, the arm of the business that focusses on contracts with a value over £100m and he explains how digital processes have transformed how the contractor is delivering the project.

In the first instance he describes how Kier is applying field technology to the project with the BIM construction management tool Dalux. “It’s basically taking paper out of the equation for our quality processes, health and safety forms, snagging and benchmarking – it’s all handled by an intuitive system which we can easily deploy on smartphones,” he says. “I call it Google-like, people can pick it up and run with it. It just needs a little bit of coercing. Three hours of training for something is just a waste of time, but little and often can be good because this software’s moving and we want to take full advantage of new functionality.

“For example at Wellingborough the [Dalux] application we use includes 360 degree photography [of site works] with the result that within two months we had 9,000 spherical photos capturing the site and it’s really impressive,” he continues. “We’ve come to a pivot point now where this stuff is no longer [taking place in] a technician’s world, you can easily deploy it and it soon becomes the normal. We use relatively cheap £300 Ricoh Theta cameras that go on a light stand at a location.” He illustrates how operatives can use familiar devices with the system. “From your phone you press ‘capture’ and it takes a 360 degree photograph and relates it to a 2D drawing or to the [BIM] model itself so you know where you’ve taken it and it’s registered and time-stamped,” he says.

Kier bid director Rebecca Wade is clearly also a fan of the system. “As well as those cameras which give us that audit trail of progress over time, we also use hand held devices [to link in remote workers]. We have instances where we go to the workface, particularly in Covid times where our design team is working remotely, and they can join us if we’ve got a coordination piece or something we want to look at on site,” she says. “We can have that conversation and run it as a distanced design team meeting, but we’re still connected and looking at things together.”

She says Kier also uses field BIM technology for quality management. “For us the definition of an intelligent site also takes place before we get to onsite assembly. With a project such as Wellingborough where we have over 15,000 pre-cast panels alone – and that goes to almost 60,000 when you consider sub-components – we’re using digital tools to map that journey with QA inspection, tracking as they come to site and then to onsite installation. So [both] digital and modern methods of construction go hand in hand for that definition of what makes an intelligent site.” 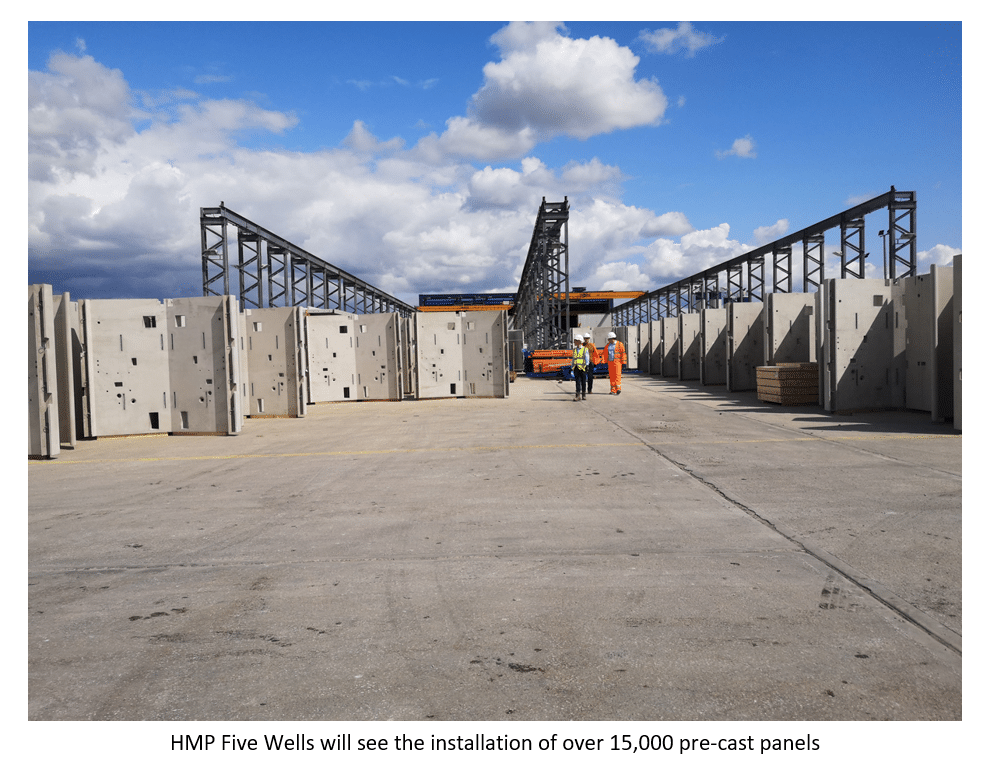 “One of the things that’s been used vigorously at Five Wells is drone technology,” says Franklin. “We’ve had monthly flyovers from the demolition stage right through to where we are now, and it will continue to the end. It gives us a really good record of the site and it has also allowed us to monitor our earthworks much better,” he says. “The drone takes overlaying geolocated photographs and this photogrammetry gives us a map of the site. We can then do a profile comparison against our formation level which gives us cut and fill [guidance].

“We started looking at drone technology in 2015 but I think its application at Five Wells is the most comprehensive adoption of the technology so far in Kier. The drone is in constant communication with a ground receiver to give it an accurate position and we get deliverables from [the drone subcontractor] which could be point cloud files, videos and images,” says Franklin. “We can all access the point cloud geometry in Dalux and overlay that on our design models. As this project has a focus on offsite, those 15,000 precast [panels] form seven house-blocks in a cruciform formation and we install the risers in a pre-fabricated module.” 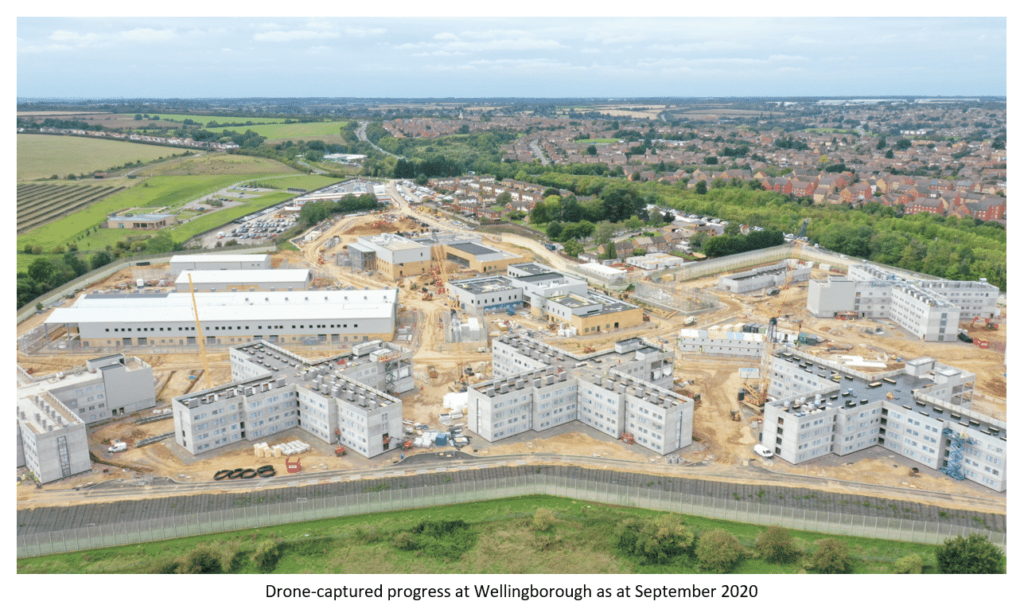 Another initiative that saved sleepless nights saw scanning play a crucial role during the installation of 12m risers that span the full four stories of the buildings.

“It’s a long and complex unit,” says Franklin. “The void in the precast that accepts that [riser] is very narrow and so the construction team wanted to check the tolerance of the build to make sure they could accept the prefabricated unit. Prior to the complex lifting operations, we used a terrestrial scanner on a tripod and scanned five of the risers,” he says.

Wade says this was a solution that solved a former concern. “It’s worth noting out that our prefab MEP provider had had issues with a previous design in terms of building to tolerances, so for us, using those digital tools as part of a multi-layered QA check was really important to provide that assurance in advance of starting the lifting operations,” she says.

Kier sent sent the scanning data to a Barcelona based Scaled Robotics which imparts information derived from the data via an online platform. The Kier team could then overlay this representation onto its design models to create a heat map which enabled it to check where the building was in tolerance. “We surveyed five of these [risers] and realised we did have enough room to get these cages in on all five occasions,” says Franklin, “even though we only had 24mm tolerance at the front and the back, which is very tight. It gave the team the confidence to start those lifting operations and everything was slung in just fine so that was a good little [exercise] there.”

“In the early days of the development, using virtual reality helped with stakeholder engagement sessions,” says Wade. “It’s [especially] relevant when looking at distances and understanding prisoner access routes etcetera. Equally, we use AR (augmented reality) to help with understanding site progress [for operative] inductions and where work will be taking place relative to the model,” she says.
“VR is particularly used with stakeholders, and AR we find is more used as a tool onsite. Using fly-throughs has been really helpful and we use our 4D sequencing model to illustrate the efficiencies we’re gaining when comparing modern methods of construction relative to a traditional build as well. It’s one thing explaining it in terms of Gant charts and programmes but I think actually putting it together in a 4D sequencing model really brings those aspects to life,” she adds.

Franklin says the Dalux software provides the AR platform. “The beauty of Dalux is it has an incredibly fast graphics engine within it. All you need to do is hold up your phone in a room, find the same area in the model and then pick some points in that room such as corners or a column and it will then lock [the image] against the reality,” he says. “You can then fade in and out from the model through the phone. It’s quite incredible really. It works better in some rooms than others, but it can [still] handle the models on the smartphones that we all carry. People use it out in the field to understand the spaces [in the build] and what [work is] coming next. The design management team also took it out into all of our main buildings [at Wellingborough] and used it to do an assessment of the design and to see where things were coming [in].

Digital was integral to this clients tender questions – they were really stretching EIRs and AIRs which set the tone for the rest of the tender,” says Wade. “We’ve been doing some work reflecting on what we said in the tender relative to what we did. It was a holistic approach to digital and across the board we said we would address it in a number of ways rather than homing in on one aspect of the scheme,” she says. “It’s what made it the game changer for that coming together of multiple aspects, all with the end goal of making it more efficient and driving time and cost savings. We want it to be a springboard and to take it further; our language has changed from BIM to digital to now talking very much about data and how we can best use that.”

Wade rolls out some savings that are expected to be realised at the project. “In terms of the coming together of offsite and digital, it’s going to be circa 22% quicker for the onsite period,” she says. “We’ve saved a third in onsite personnel, we estimate the [scanning and modelling for the] MEP risers saved us about 54,000 man-hours on site. We think digital tools use around the design and planning has saved a potential £7m in pre-emptive remedial works that could have been required had aspects not been discovered early in the digital model. With a cellular scheme such as Wellingborough, if you were to have one issue, you would replicate it over 1,680 cells, so one small issue becomes really significant so the importance of understanding the design and scenario planning various sequences in the digital world before doing anything physically was absolutely fundamental and reflective of those quite large [savings] figures.

Of course, while the proof of savings must inevitably be in the pudding, it seems clear that Kier is confident of the benefits already being realised by combining a number of digital and modern construction techniques at HMP Five Wells, which is due for handover this October. 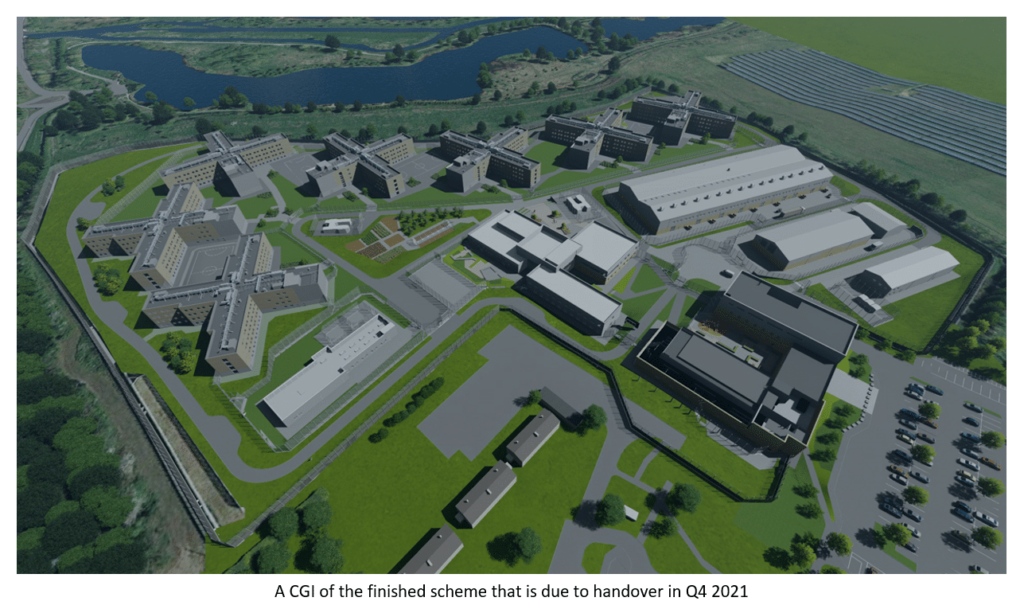 Wade says that Kier is careful not to dictate what its supply chain must use. “We’re really conscious not to impose these systems on the supply chain – we want their buy-in as much as anything,” she says. “It’s as much about appreciating what current systems they may or may not be using and providing them with an understanding of why we see the benefits. One of the best examples was with one of our precast manufacturers, which was so taken with the use of Dalux that they are looking at rolling it out across their wider manufacturing facility. It’s about spending a lot of time, be it on site or in the factories, with individuals [to show how something] works.” She says that while Kier deploys its team of BIM coordinators in this guidance role, it is also keen to use its digital construction apprentices to help as well.

The Fast Train to Opportunity

Products and Materials: The Future of Input...

The Future of Automation in Construction Marketing