Last week we examined the Circular Twin initiative that’s seen Morgan Sindall leading on redesigning the project delivery model to embrace all elements of the supply chain from inception. This week we look at Costain’s work on setting out a pathway to enable net zero emissions by 2035 and some of the things the industry must do to turn words into action.

Like many in such roles, Costain group climate change director Lara Young is passionate about reducing the industry’s impact on climate change, and to support the top 20 contractor achieve its own net zero goal, she’s focussed on the four areas commonly considered key for construction.

“You’ve got design influences, materials – mainly concrete, steel and aggregate – vehicle footprint and then accommodation,” she says. But while these may be industry-wide acknowledged areas, grasping the nettle has proved tentative.

“None of that footprint should be a surprise; there is nothing in our plan that should be unexpected, because we’ve known for ages as an industry where the hotspots lie. We’ve dabbled [as a sector] in a few but we haven’t really addressed them,” she says. “If you want to truly address net zero, you’ve got to look at the good, the ugly and the bad.

“Building on what we do well is great and we need to do more of it. But there are some things we just need to stop doing and others we need to get better at. That’s a really awkward place for organisations to be because if you’re one of the few, you have to be quite brave to stand out and that’s a big challenge for the industry.” 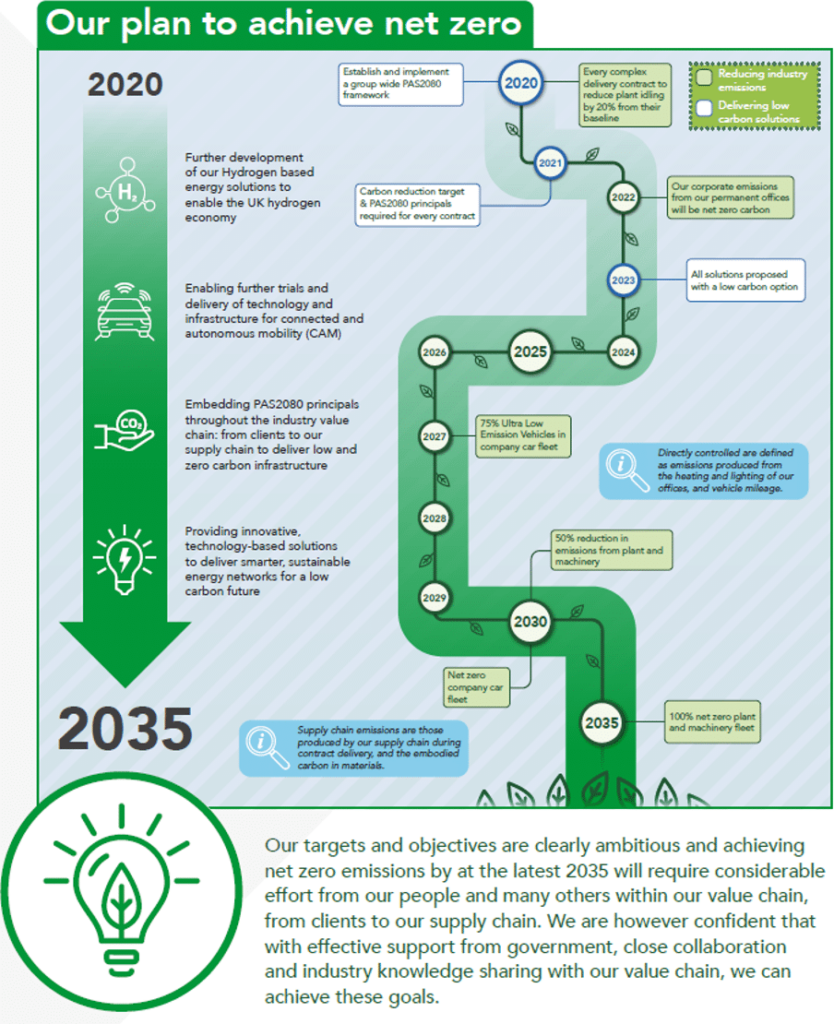 She says there’s an issue when it comes to sorting through commitments that organisations have made so far. “It’s quite telling that when you look at the number of plans that have been [published], everyone’s committed to a net zero target date, though they might call it something different, but there are very few that give the detail and the stepping stones. There are a few statements that say ‘we’re going to tackle this or that’, but where’s the map that breaks it down as to what needs to happen and what’s already in place?”

Young likens these to the good intentions commonly heard from people around January. “We can all have long term commitments, it’s a bit like your New Year’s resolution, but they need to happen one step at a time so that you don’t fail and pack in your gym membership by March.”

She says there’s another challenge around assurance and accountability. “There’s huge pressure at the moment to be seen doing stuff to approach net zero, which is great. You can sign up to every commitment under the sun, which at least raises awareness. But unless you follow through, they’re just a nice thing to sign up to. So the assurance and the accountability piece that makes sure we are actually doing [what’s been promised] is vital and at the moment that is drastically lacking.”

It’s a critical point given the UK Government’s proposal during COP26 that says while firms will soon have to show how they will hit climate change targets, those pledges will not be mandatory.

Young says that alongside penalties, positive recognition of businesses that have followed through on commitments is vital. But she reiterates that setting up an assurance process, and one that doesn’t have to be complicated, is fundamental. “While it is about data, we don’t need more at the moment,” she says, “we need to be more consistent with it and actually use it. It’s a case of having those monthly meetings with dashboards and using them to inform and drive change.”

When it comes to clients, Young believes contractors must have a conversation that impresses the need for an agreement that puts carbon front and centre. “It’s up to Costain to hold our clients accountable and say ‘you’ve got a carbon target you really want to achieve, but the contract has no incentive around it’,” she says. “We have a responsibility to flag that.”

Young says that since a design has such an impact on materials used, they can to some extent be considered together when assessing footprint. “Design along with concrete, steel and aggregate makes up 69% of our footprint,” she says. “Then we have plant, which represents 17% and our car allowance and company cars are about 8%.

“Where we use an electric or hydrogen excavator we’re making sure that’s in the agreement with our supply chain. But actually, that’s only half the focus because even with traditional machines, we can be more effective in using them in the most efficient manner and with less idling.

It’s a point illustrated by the contractor’s assertion that using telematics has cut plant idling by 20% in 2020 and it’s on course to have made a similar reduction by the end of this year.

Young says is has to be a two-pronged approach of bringing in new low carbon machinery combined with better use of existing. “We can’t just swap out everything for a new model tomorrow as they’re not available [yet in the numbers needed],” she says.

She finishes by explaining that the 2% carbon footprint attributed to Costain’s permanent and temporary accommodation energy consumption is on the small side for a good reason. “It’s low because we’re on 100% renewable energy tariffs,” she says.

How To Generate More Leads Through SEO