Get Fit For Brexit: Unleash Efficiencies Through Blockchain

Home / Get Fit For Brexit: Unleash Efficiencies Through Blockchain

In the next instalment of our articles to help you best prepare for Brexit uncertainty we take a further look at the advantages of going digital and then zoom in on one of the newer technologies to enter construction – blockchain.

Barbour ABI talked to Willmott Dixon digital manager Andrew Gamblen about the imperative to go digital – and he doesn’t mince his words. “If you don’t go digital you’ll go extinct, it’s as simple as that,” he says. “The world is no longer analogue and the growing pressure from all aspects of society is to become digital because so much of the world [already] is. If you try to remain as an analogue old-school style company you will not survive. You have no longevity in your business – none.”

After such a stark prediction he shifts tone and moves from the stick to the carrot. “Going digital means that you’re able to work more efficiently, you’re able to provide a better service to your customers and it also means that your people are going to be more productive – you’re going to achieve more with the staff you currently have.”

Gamblen outlines advantages at both the site and design sides of the fence. “The benefits are a significant reduction in risk and wasted process. If you can reduce your risk and increase the understanding of what the site teams need to do, your risk assessment and method statement of work, all of a sudden the amount of paperwork generated is less and people understand what you’re trying to do more,” he says.

“If there are complicated details and issues in what you’re trying to achieve [at the design stage], you’re able to communicate it so much more effectively so others understand it and why the design needs to be modified in a certain way – it just makes it that much easier.”
While Gamblen makes a pretty compelling case for business to make headway on their digital journey, Barbour ABI wanted to contextualise some of the benefits, and spoke to Steve Slessor who is regional director, Scotland at Morrison Construction. Alongside looking after its infrastructure business he is also president of the Chartered Institution of Civil Engineering Surveyors. He’s another passionate advocate of the advantages that going digital bring and has zeroed in on one aspect to improve business efficiency.

“We need to make better decisions to understand our risk,” he says. “The productivity gaps that we have in construction make it very challenging to operate the model we have now where we have really low margins. The industry is ripe for disruption.” 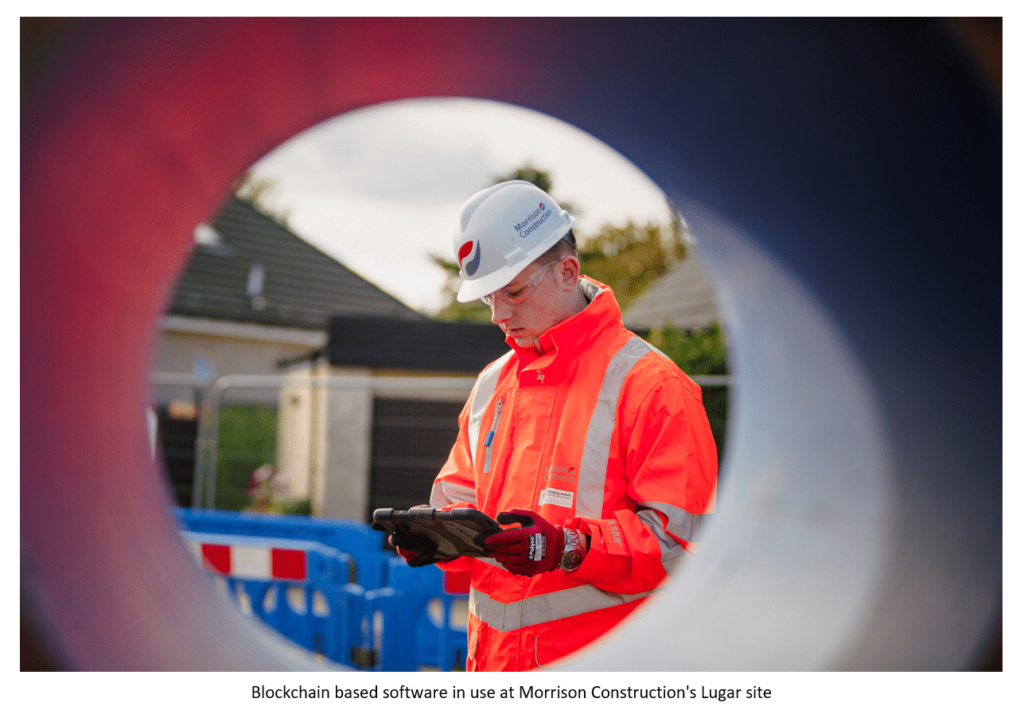 In particular, Morrison has been doing some interesting things with blockchain. Essentially, this is a way of creating an immutable digital record of what has actually happened. It’s a technology generally aligned with digital ledgers, but in a sector that isn’t shy of a contractual dispute, Slessor sees the benefits as going beyond this.

“I originally got involved with blockchain because I’m a QS by trade, and I wanted a way of taking the heat out of arguments about quantum. It creates a record of what happened – it doesn’t matter whose fault something was, you spend less time arguing about [cost] and you try to establish principles,” he says.

“A lot of common contractual disputes occur where people might agree about the need for a variation or an extra, but they spend a lot of time arguing over the value of that and how resources were used. Blockchain takes away that argument because you’ve got a record that can’t be changed.”

“It creates a record of what happened – it doesn’t matter whose fault something was, you spend less time arguing about [cost] and you try to establish principles,”

Then Slessor had a moment of inspiration. “I got to thinking ‘hang on, there are a lot of other benefits here because if you work on target cost contracts [a form of cost reimbursable contract used in many infrastructure projects], then it eliminates the need for an auditor because all the resources you use are validated by the blockchain and it can’t be changed. It takes away the ambiguity and gives you a black and white picture. [Then] we thought ‘why don’t we expand on that and record people’s accreditations for working on sites’ – it’s like a digital passport they would have for their career with us.”

Slessor outlines Morrison’s digital journey to illustrate how such digital practices have improved the business such as with health and safety, efficiency and productivity. “Initially we had trials where we were checking mobile phones in people’s pockets to understand where they were in proximity to plant equipment and where works were going on,” he says.

But with the genie now out of the lamp, things started to get a head of steam. “In the next iteration of the trial we ditched the phones [idea] and moved to low energy Bluetooth tags,” says Slessor. “The idea is that whether it’s a shovel, a Stihl saw, a machine or an individual, there’s a tag. That movement and interaction gets monitored and it has a lot of benefits.”

He gives an example based on the new world we find ourselves facing. “In the current state of affairs it acts as a natural track and trace for Covid – it can give audible and visual alerts to site managers and say ‘those two people are working too close together’.”

“It takes away the ambiguity and gives you a black and white picture.”

Thinking it through, Slessor realised it could help with another pressing concern. “One of the things I was really concerned about with Covid was calculating productivity loss, with all the different constraints and constant hand-washing. So we set up a geofence around the hand-wash and anti-bacterial stations and every time someone went in to interact with that place then we understood what the gap in productivity was. We knew after a while that we were losing maybe 30 minutes a day just by people washing hands. Because it was validated by the blockchain you’ve got an immutable record of what actually happened.”

Morrison recently finished a pilot trial of blockchain at a £1m job improving a wastewater treatment works for Scottish Water at Lugar in Ayrshire. With the results providing demonstrable benefits, the company is expanding the initiative and has recently begun a second trial at a £12m flood alleviation scheme in Arbroath for Angus Council. 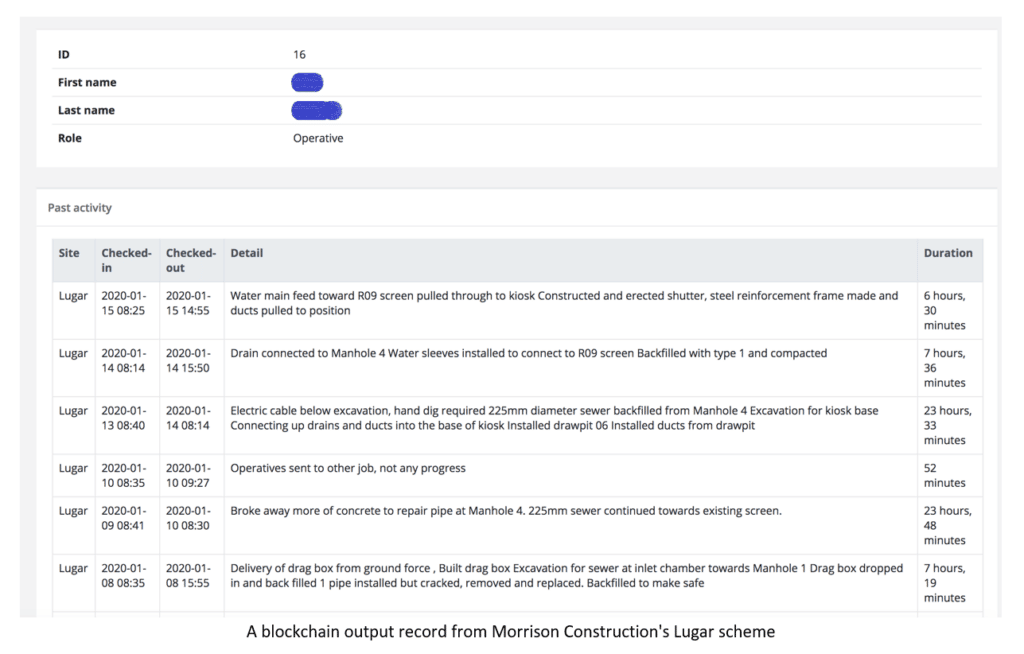 “Data will be the new currency in construction because data is knowledge and knowledge is power,” says Slessor. “I have invested by creating our first ever dedicated business intelligence team. We’ve recruited data scientists and analysts to do this. We can’t crack the nuts of [productivity, low margins and low carbon construction] by just employing engineers, surveyors and construction managers – we’ll just get the same thinking. We need diverse thinking to solve these.”

While underlining that no one really knows what the post-Brexit landscape is going to look like, he offers an example of how blockchain might benefit the industry. “Take trade tariffs,” he says. “At the Northern Irish border where goods are going to flow between there and Southern Ireland, they will be subject to inspections once they cross over into mainland UK. Blockchain could solve that problem pretty easily because if you use it [as an immutable record] from where the goods are being manufactured from, the chain of custody would get rid of arguments about tariffs and eliminate a lot of checking procedures because they’re done digitally.”

This isn’t pie in the sky thinking either, as Slessor is keen to illustrate. “If you look at the Port of Rotterdam, containers come from all over the world and they use blockchain to validate [goods] and apply the right tariffs,” he says.

“Data will be the new currency in construction because data is knowledge and knowledge is power,”

There’s clearly a lot of food for thought here, but one thing is certain – with the industry already moving into the digital space, now is the time to get on board and consider how going digital could advantage your organisation.

The Fast Train to Opportunity

Products and Materials: The Future of Input...

The Future of Automation in Construction Marketing